The beginning of November 2018 can be rightfully written into the history of Noveo: our Paris team visits Novosibirsk and St. Petersburg by far not every year. However, this year it worked out almost for the whole team! The trip could amount to an expedition: a large team, vast geography, romance of a Siberian winter. 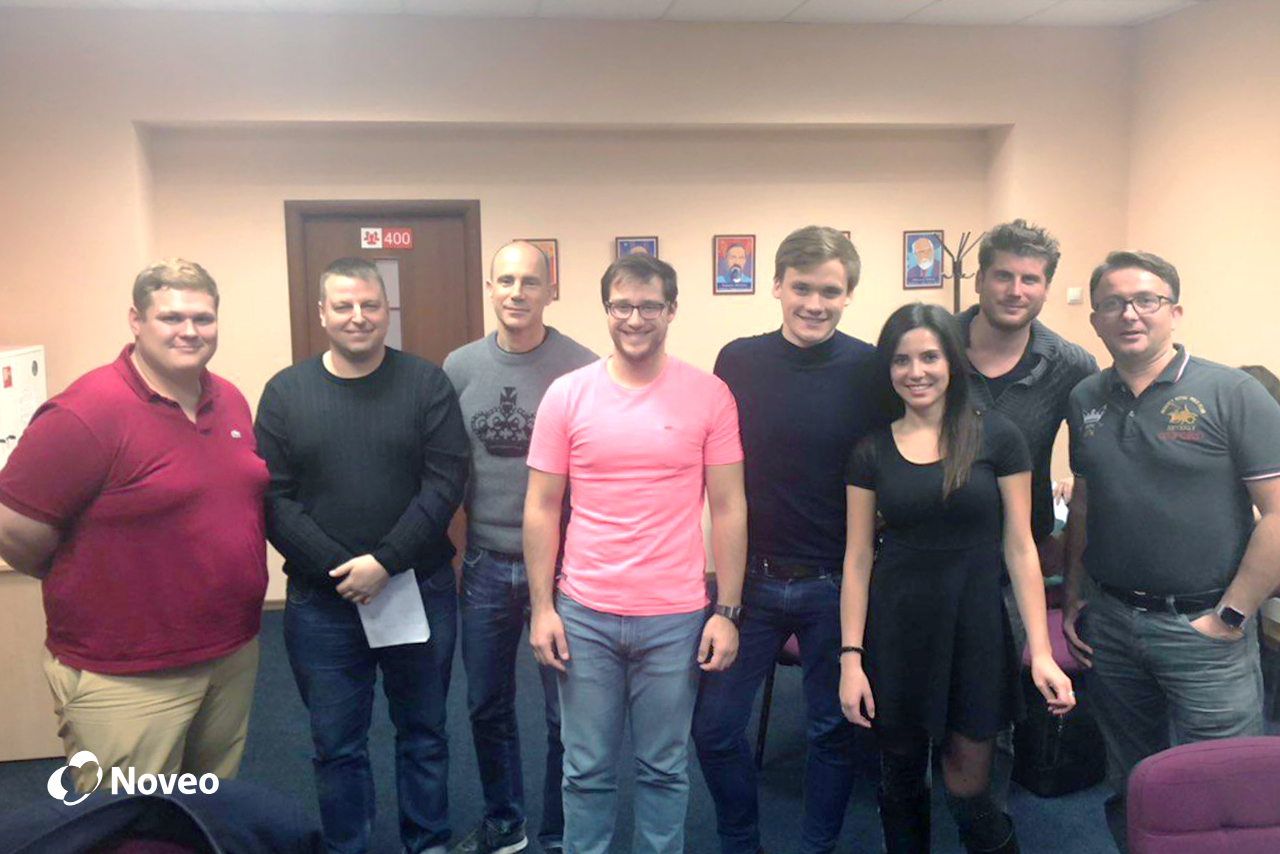 In the early morning hours of Thursday, November 8, the spotlessly white runway of Tolmachevo airport (FYI: the last month of autumn in Novosibirsk is white enough, as a rule) welcomed the plane with our Parisian colleagues: the troops of the tough guys and a fragile yet brave lady.

It should be noted the weather was typical for Siberia (snow, February-like whirling wind, the first frost wave). We were really concerned about the French who were not used to such hardcore. But our far-seeing guests had stocked up with some warm clothes and were prepared for the cold. 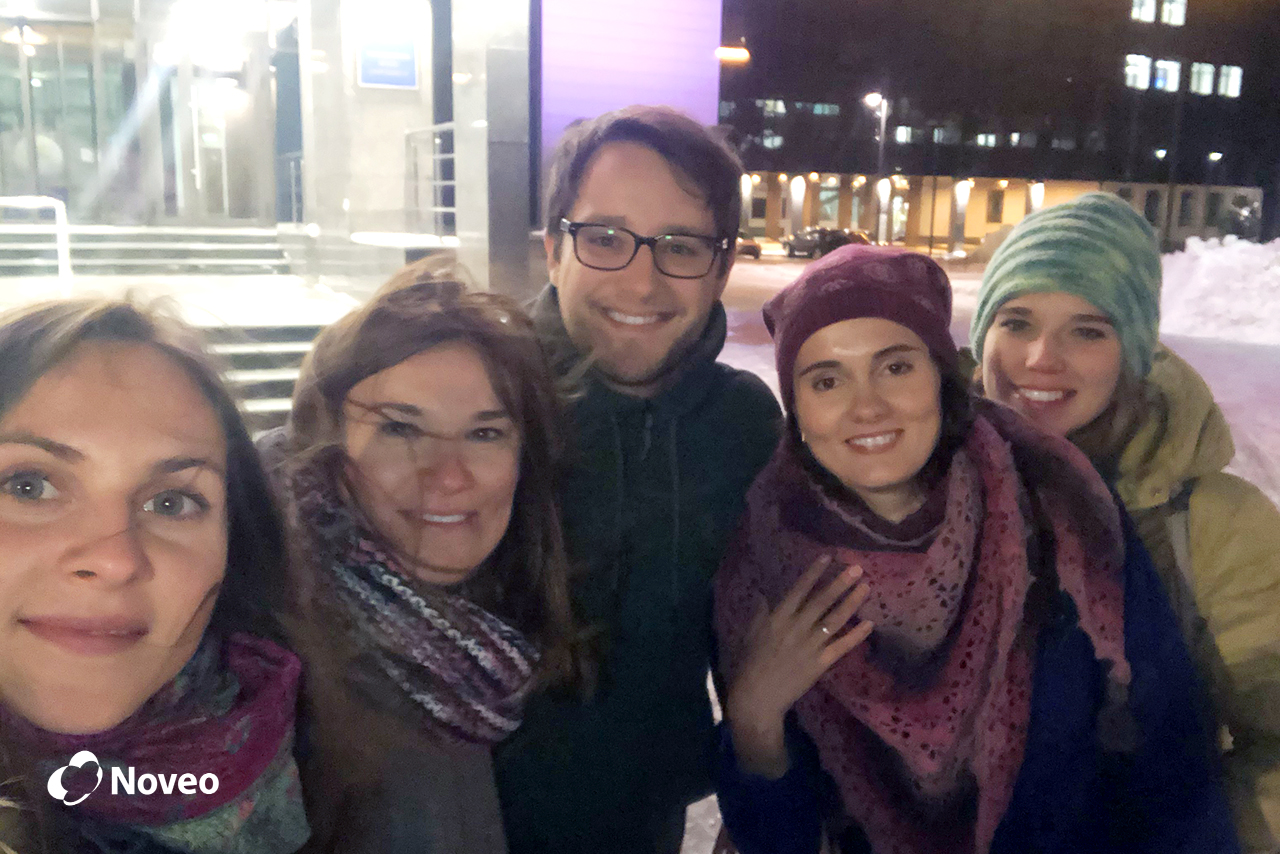 We were also well prepared and arranged a warm reception in all regards. It was the first time some of them came to Russia, moreover, to its very heart. Hard to imagine how many new discoveries they were going to have.

The guys really liked Novosibirsk. From the day one of their stay they got rid of the stereotypes connected with ‘wild Siberia’. Since the Parisians were accommodated in the city centre but worked in the office in Akademgorodok, they were able to check the distance to the scientific center of Siberia while commuting along the main arteries. We couldn't help showing our french colleagues around: the building of NSU, Technopark, lovely streets and famous forest paths of Akademgorodok.

The office work was in full swing! In two days we managed to work on a lot of tasks and together figure out how to solve some current issues. Еven having very intense interaction on a daily basis at work, a live meeting brings the team closer and makes the workflow more clear.

The meetings with the sales managers, project managers, account managers, test engineers, analysts were very efficient. And it is no surprise: everyone had prepared well, thought through the agenda not to miss anything. The teams discussed the workflow in the detail from the start to the end of a project considering the points of view of everyone involved. Everybody presented their own part, spoke about the problems they had encountered, the ways of solving and lifehacks. The participants were actively asking the speakers questions and shared their observations. It went so smoothly that one didn't even feel the people had different mentality.

The language barrier was not a problem either. We are one team united by a common deal even though we come from different points of our planet :) 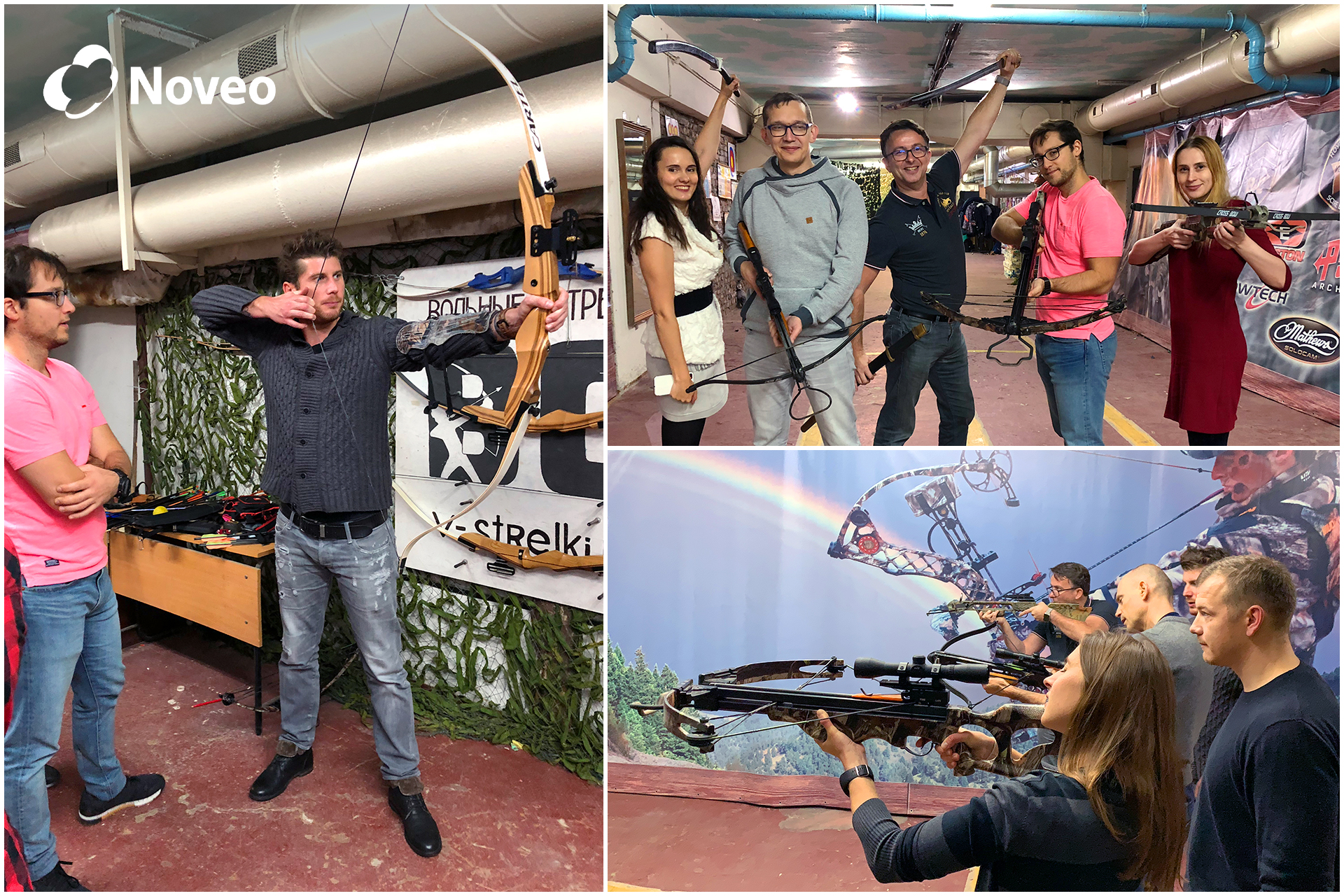 In the evening after the meetings and discussions the guests headed to a shooting gallery accompanied by the Noveoers with various levels of French. There were so many people willing to speak to the native speakers they even had to queue :) The shooting gallery offered a wide rage of armoury: bows, both optical-aided and simple arbalests, and all possible throwing weapon. Someone saw a shuriken for the first time: it just looked cute but scary in action. After a little training with an instructor our guys showed some impressive results. Everything: knives, shurikens, a throwing axe and even a spoon hit the target!

Shooting is not a piece of cake, it requires accuracy, attention and knack but it provides fantastic emotional output. The instructor of the shooting gallery turned out to be a very friendly host who managed to teach combat skills and at the same time check that the shooters were not firing at one another =)

We also found a special dummy, let's name it “the archenemy - stress” which you could hit heartily with a stick to release your stress and negative emotions.

What do you have to say here?

After a good ‘fight’ the French team went to feast their eyes on the nightlit city… so as to see the siberian team in the office again on Friday, which happened to be a good day not only for work but also for a great dinner, heart-to-heart talks, photos and souvenirs. 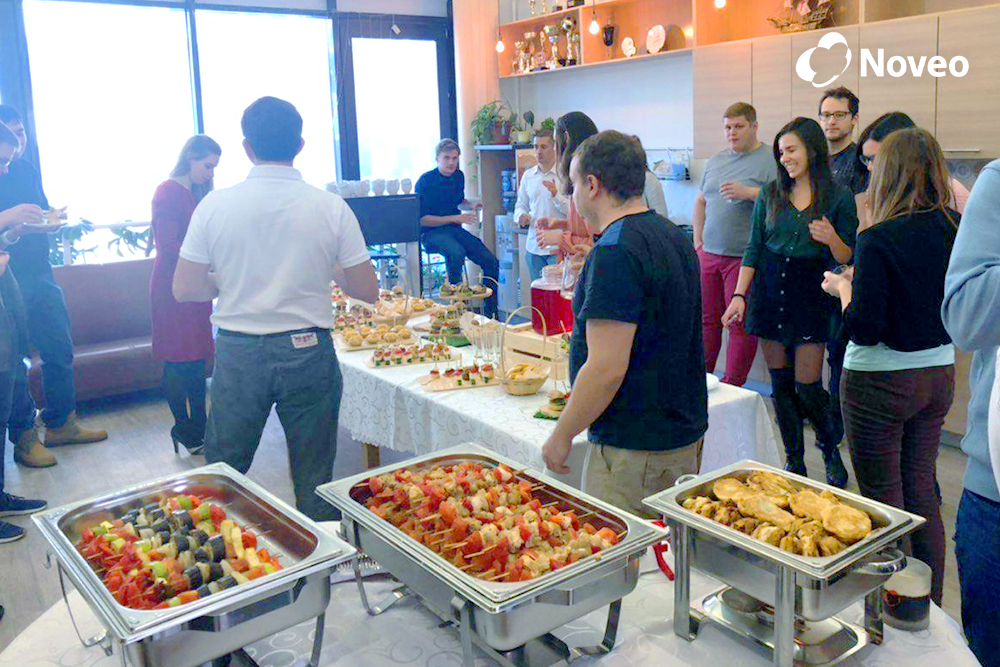 On Saturday at 11 o'clock our guests set off for the northern capital. On the way from the airport the Petersburgers gave a small tour around the city, told about the architecture, sights, history and culture of the city. Our French guests assumed that Paris and St. Petersburg were quite different each of which retaining its unique beauty. 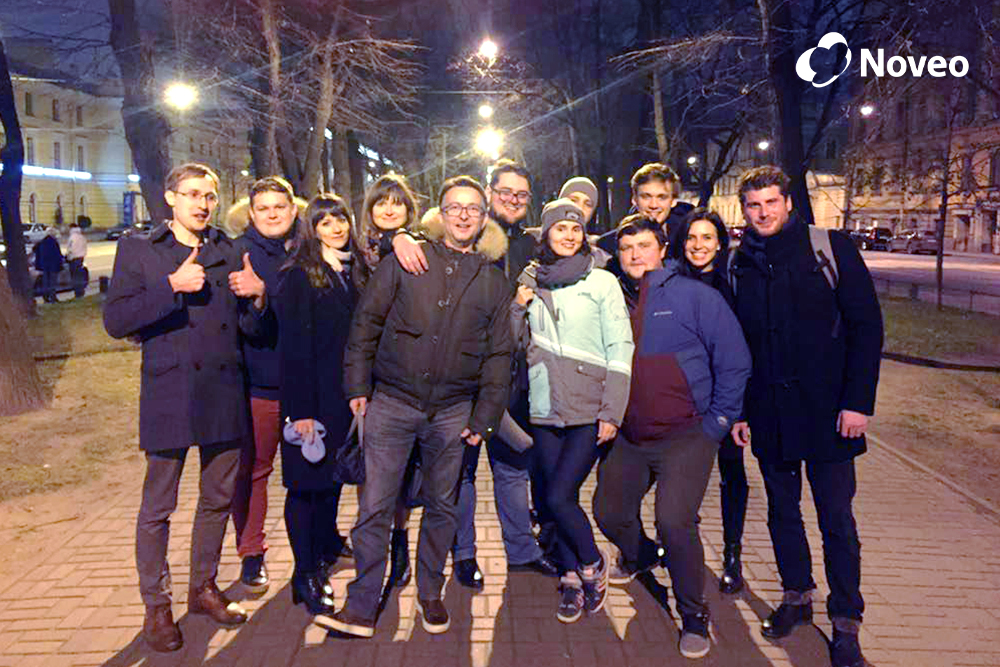 Moreover, one of our french colleagues had a birthday that day. We were pretending as if nothing happened even though a surprise party with a birthday cake and warm wishes had been planned for him in the office. 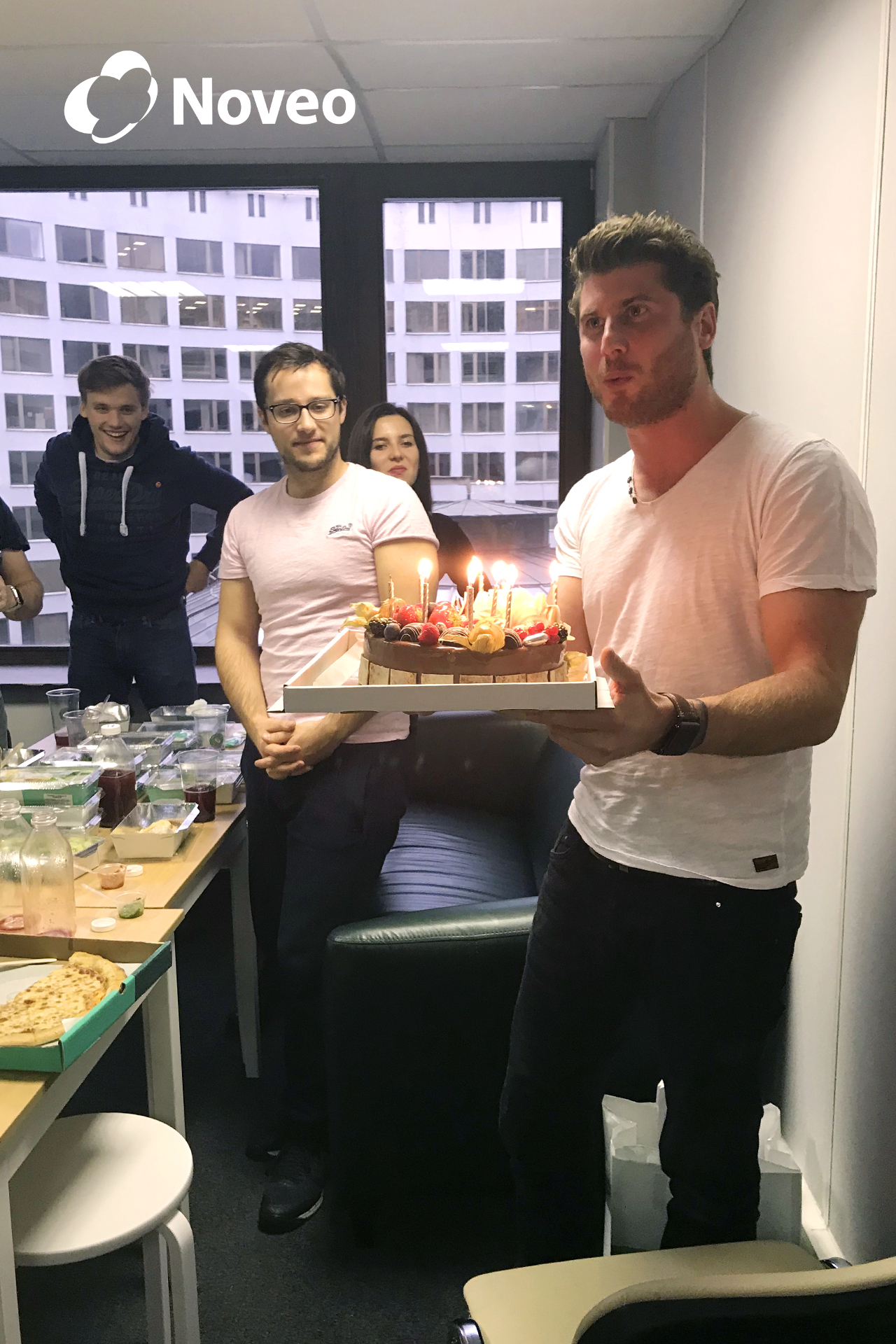 Such a positive wave let us work very well. There was a great meeting held involving not only the sales team but also the managers from St. Petersburg and the tech leads of various directions. Our French colleagues shared some valuable pieces of advice and experience in carrying out the project estimation with the assistance of tech leads all the way through the process until the end of the work. They discussed how the architecture and technical details affect the estimation. Each common project was taken into account.

Anna, the manager of the Novosibirsk department, highlighted some unevident details of project managing and also spoke on what had to be considered when rendering project accounting to a customer.

Of course, a real-time meeting lets you address work-related issues directly with the sales manager, ask them questions, get their take on things - this is a priceless experience.  St. Petersburg is geographically closer to France anyway and such meetings erase the boundaries at all.

The guests were fascinated by St. Petersburg at night. The Neva front and the Aurora, raise of Palace Bridge, avenue lights - unforgettable views and atmosphere. To end a day in a friendly company in a cozy bar is a tradition which unites nations. 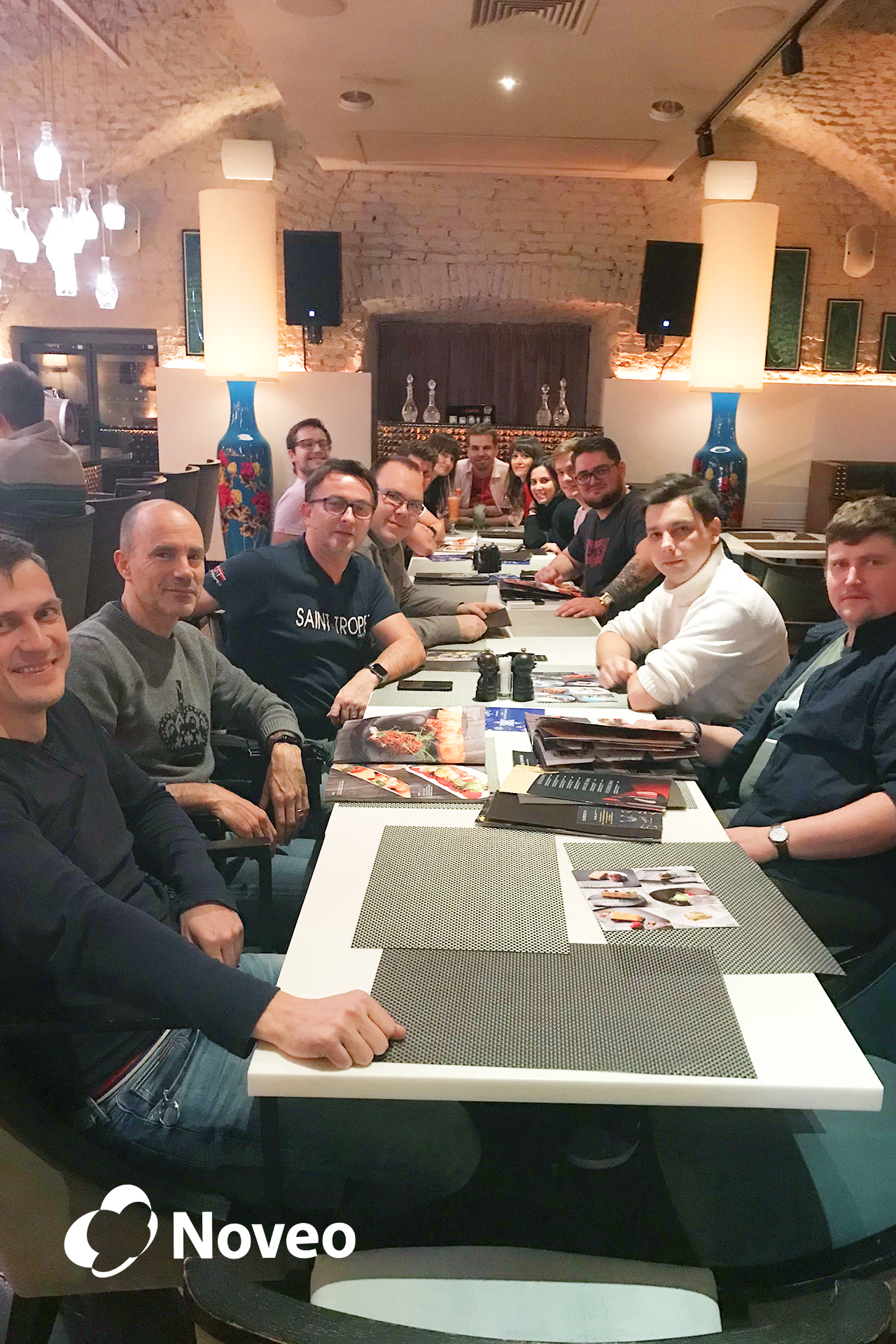 Neither being tired after the flights nor a busy schedule could stop our French colleagues from getting vivid impressions of the trip. They were pleased about the trip and glad to share it with our guys, they invited them to Paris and left with the only regret that the time in Russia had passed too fast.

For us it was also over in the blink of an eye, it was such productive, warm and hearty time! Guests are always welcome here and we can’t wait to meet again! 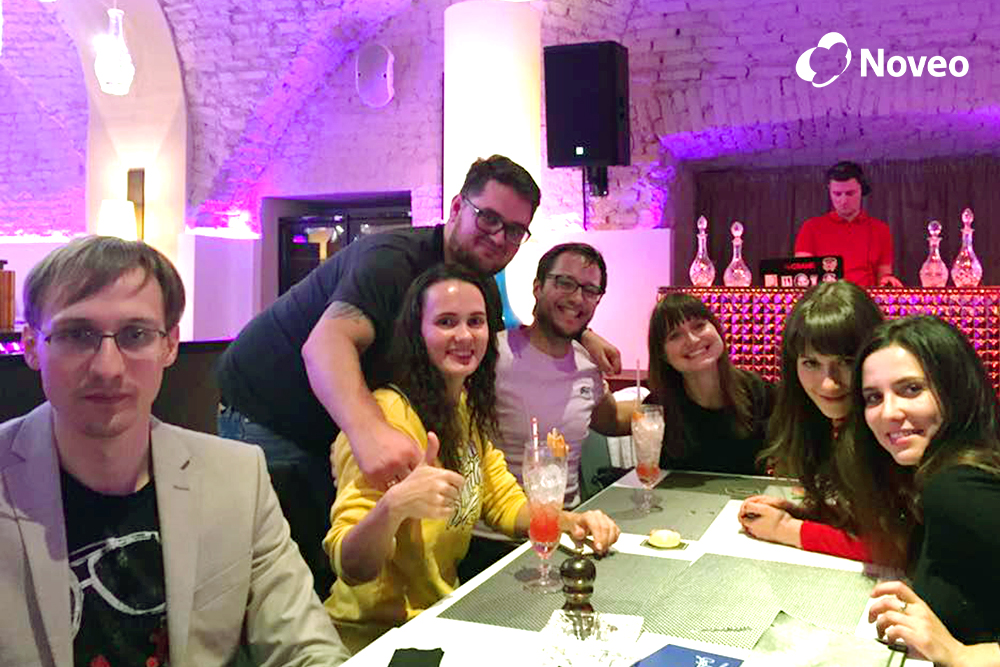